Finnish player Tapio Vihakas managed to outlast a crowd of 50K people to win WSOP Online Event #7 for a massive payday and the prestigious World Series of Poker gold bracelet on OlyBet Poker.

World Series of Poker Online is the series every online poker player is looking for. WSOP Online 2022 festival started on August 14th with mindblowing prize pools in the 33 Bracelet Events. And we didn’t have to wait long for the first OlyBet player to scoop the first prize.

A dream to win a $1 million bounty attracted 51,003 total entries, which helped to exceed a $10 million guarantee. 5,797 players advanced to the 2nd day, and during the first five minutes of the second stage, United States’ Scott Ball pulled a seven-digit top bounty.

The play continued for the remainder of the $10,200,600 prize pool, and the nine best players advanced to the final, which concluded on Saturday, August 27th.

Tapio Vihakas started the final table with the 6th stack of only 22 big blinds, but he was able to maneuver his way to the very end. In the heads-up duel, Finnish poker pro defeated Hyunsup Kim from Singapore, securing his first WSOP bracelet and a $367.953 prize. 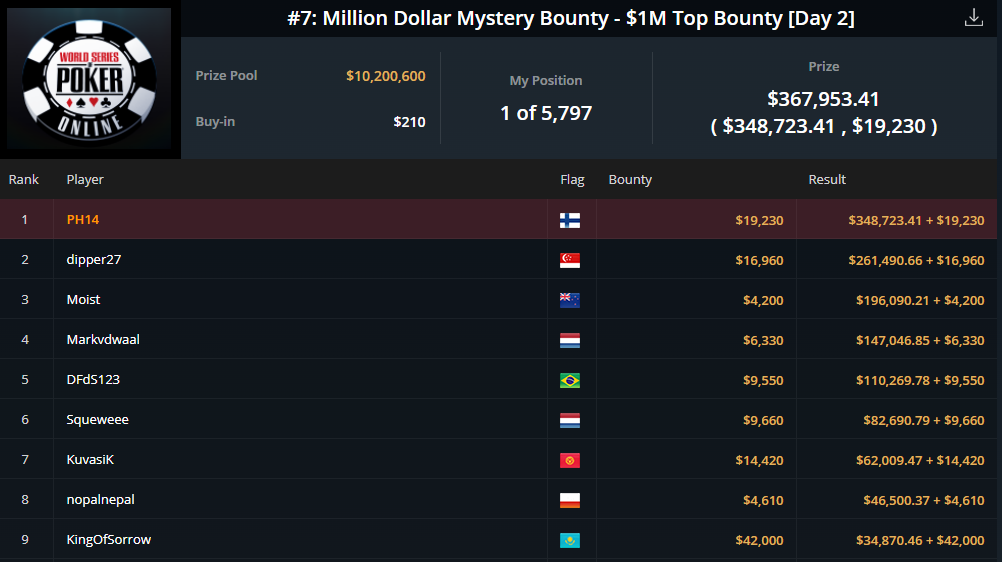 Vihakas is a well-known Finnish poker player with more than $330K in live tournament earnings. He has solid results in various major live festivals, including the largest poker festival in Northern Europe – the Kings of Tallinn. He hasn’t missed a Kings of Tallinn series since 2017.

OlyBet players have an opportunity to qualify for the upcoming Kings of Tallinn festival online. Daily satellites are running with more than thirty €1,100 Main Event tickets up for grabs in online qualifiers till the festival starts on September 12th.

While the prestigious WSOP Online festival on GG Network will continue until September 27th, with 20 more gold bracelets to be won, you can join the action on OlyBet Poker.

OlyBet Poker is determined to provide you with all the latest poker news, interviews, reactions, LIVE streams and videos. We're all-in!

The 2023 Kings of Tallinn schedule highlighted by €500K Main Event