The Estonians dominated the final table. Five finalists played under the Estonian flag, while their opposition consisted of two fins and two Latvians.

Both Latvian players busted in 8th and 7th places, and from the TOP 6 play and forward, a clear chip leader emerged as Estonian ‘joppenpuhhen‘ knocked out four opponents in a row.

On the key hand (main picture), his J9o was victorious against ATo and KQo, held by two short stacks. A 9-high board secured him a massive 4,5x chip lead going into heads-up versus Finland’s ‘Roskakasi84‘. The Finnish player grinded the chip deficit back to 1:2 until everything ended with a good ol’ flip.

‘Roskakas84’ found AQo, but could not improve against the opponent’s pair of threes. A dominating performance secured ‘joppenpuhhen’ an impressive total prize of €2,041, including €1,428 in bounties. 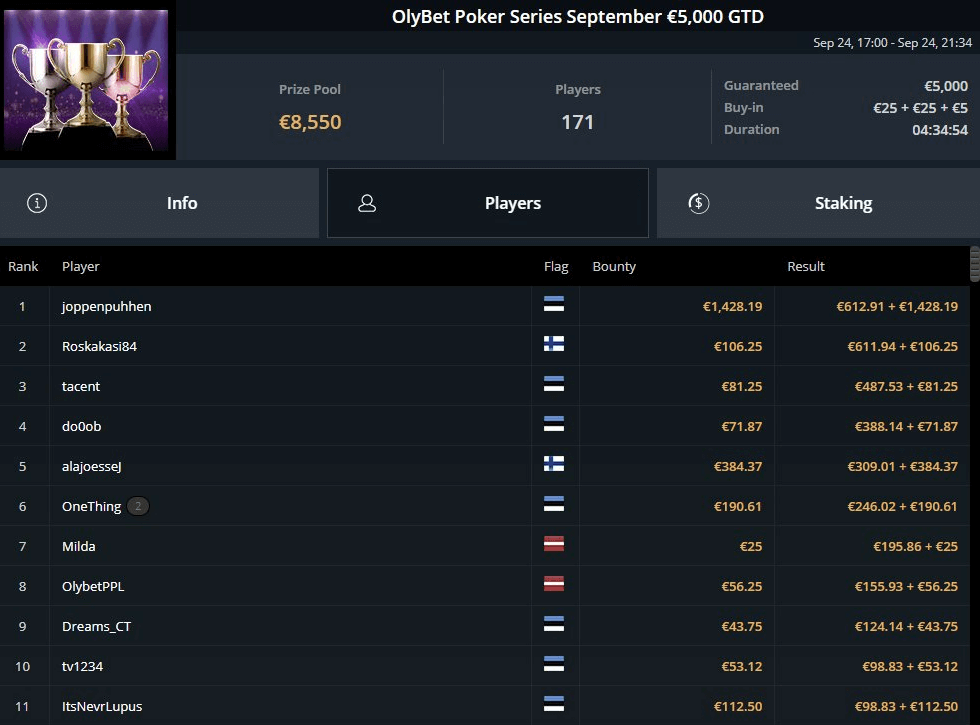 You can watch the Estonian WinTV show featuring this tournament here.

The next OlyBet Poker Series tourney will be held already on Oct 22. You can qualify for the tournament via lower buy-in OlyBet Events satellites or even OlyBet Events Freebuys, running daily from 20:00, with a €55 OlyBet Events ticket as a top prize.

OlyBet Poker is determined to provide you with all the latest poker news, interviews, reactions, LIVE streams and videos. We're all-in!