Now that it’s all said and done, with Lionel Messi fulfilling his lifelong dream of World Cup glory, there’s plenty to remember and reflect on. The Qatar tournament emerged as one of the most exciting in World Cup history, featuring arguably the best final game.

Unexpected outcomes, mouthwatering goals, multiple broken records, and much more catered to our hunger for the World Cup action. While some may already be counting down the days (approximately 1,265) until the next tournament, let’s take a look at some of the biggest surprises that came out of the World Cup 2022.

We didn’t have to wait too long to witness one of the greatest World Cup surprises as now-champions Argentina fell short 2-1 to Saudi Arabia on the third day of the group stage. How did a team ranked around 50th in the FIFA world standings manage to secure a victory over Argentina, who entered the tournament as second favorites behind Brazil?

It was no other than Lionel Messi who opened the score with a penalty in the first half, sending Saudi Arabia’s goalkeeper in the wrong direction with a collected low shot. As a result of three goals ruled out by VAR for offside, the first half concluded with a 1-0 Argentinian lead.

Come the second half, Saudi Arabia answered with an early brace and ultimately managed to hold on to their lead to secure a 2-1 upset, putting an end to Argentina’s impressive 36-game unbeaten run dating back to 2019.

This feat was so phenomenal that the country even declared the next day a national holiday. In addition, each Saudi Arabia player was also promised a Rolls Royce by Crown Prince Mohammed bin Salman as a reward.

Cinderella story of the Atlas Lions

Morocco entered the tournament as the ultimate underdog in their group, consisting of Canada and a heavyweight duo of Croatia and Belgium. Having emerged winless in the World Cups since 1998, in the end, Morocco managed to light up the football world like no other team during their time in Qatar.

Their heroics started with a scoreless draw against 2018 finalists Croatia, only to be followed by an even more impressive performance in the form of a 2-0 victory against the Golden Generation of Belgium. That was topped with a 2-1 win over Canada, sending Moroccans to the playoffs as Group F winners with 7 points.

What followed next truly silenced all the skeptics and those who considered the team’s success in the group stage pure luck. With a humble 23% ball possession against the 2010 champs Spain, the African side managed to hold their ground past the regular and extra time and shock their opponents with a 3-0 penalty shootout win.

As if that wasn’t enough, their playoff run continued with another victory, highlighted by a defense that once again didn’t allow an opponent to score a single goal. This time, it was Cristiano Ronaldo’s Portugal, which shockingly got sent home by Youssef En-Nesyri’s 41st-minute goal.

Finally, their fairytale story in Qatar came to an end in the semi-finals at the hands of defending champions France, whom they managed to surprise with 62% possession during the game, but ultimately couldn’t find the net in a 0-2 loss.

And even though Morocco also fell short 1-2 in the third-place game against Croatia, they had already made history in Qatar. No African side had ever previously made it past the quarter-finals. The Moroccan national team made the entire world fall in love with them and brought us performances that will be talked about for generations to come. 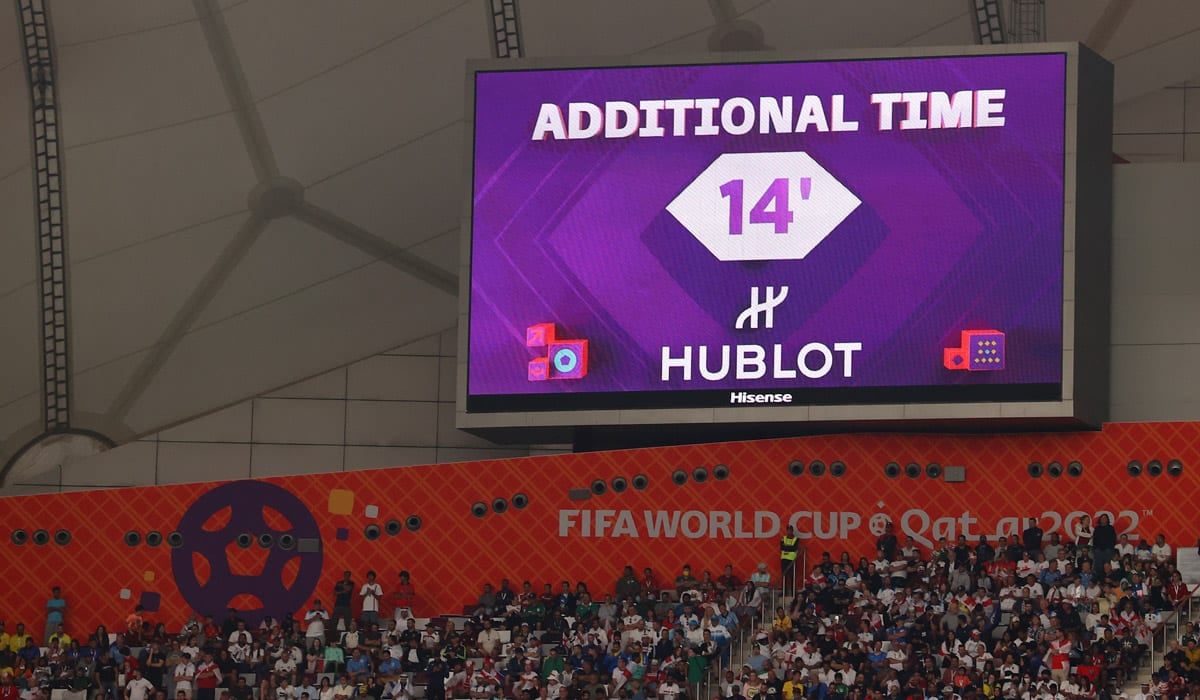 Why so much added time?!

Substitutions, time-wasting by players, lengthy goal celebrations, VAR interventions, and several other factors add up to a generous stoppage time added by the referees. In this World Cup, however, we saw some games continue far beyond what we were used to.

For instance, even the opening game between the hosts and Ecuador exceeded 100 minutes.

Then, close to half an hour was added to England’s dominant 6-2 victory over Iran in Group B, which became the longest match ever played at a World Cup. The first half was prolonged by 14 minutes, with a further 13 at the end of the second. Later the same factor played in favor of Iran, helping them snatch a heartbreaking but well-deserved win over Wales with goals in the 98th and 101st minutes.

Another example was the quarter-final encounter between the Netherlands and Argentina when the extra ten minutes to the second half helped the Dutch to find a goal in the dying minutes and take it to extra time.

In total, 563 minutes of play were added beyond the standard 90 during the tournament group stage alone. Yes, you read that right. That’s more than a whopping 9 hours! While it might take more energy from the players, football fans are definitely not against more active game time, which offers more excitement and action. Don’t be surprised to see this trend continue in the future.

No goals, no party?

There’s nothing we love more than action-packed matchups ripe with memorable moments, goalscoring opportunities, and, most importantly – GOALS.

Although the tournament in World Cup has had its fair share of exciting moments, surprises, and shocks, including group-stage exits for Belgium, Germany, and Denmark, we have also had to sit through a more significant number of goalless draws than usual.

The first round of the group stage alone produced four games in which no team could find the back of the net. By the time the group stage concluded, we had witnessed six such games, two of which came from the hands of Croatia. The final scoreless game was the Round of 16 matchup between Spain and Morroco, which started producing goals only in the penalty shootout.

In the end – seven. That’s a shared World Cup record. To put that into perspective, the 2018 tournament saw only one game ending without a score – France vs Denmark during the final round of the group stage.

Is it the rising balance in competitiveness among international teams with the globalization of the game, or due to some teams experiencing difficulties acclimating in this year’s championship? One is for sure – the World Cup 2022 certainly made up for all these 0-0 encounters with a handful of unforgettable moments and records broken. 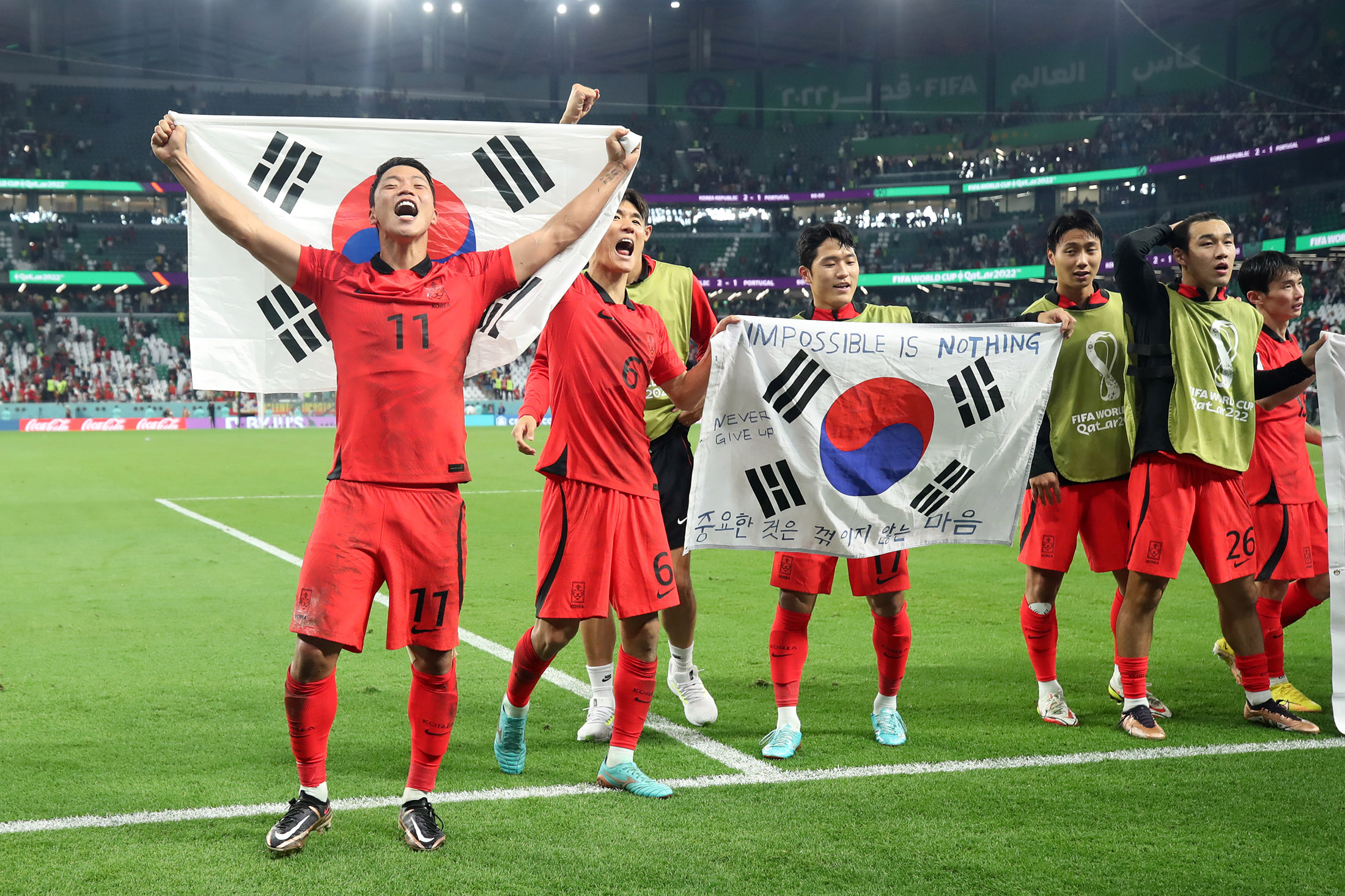 The incredible final round of the group stage

The third matchday of the group stage delivered clarity over which teams would advance to the playoffs. While Canada and Qatar had nothing but pride to fight for, most teams still had a shot at advancing. That resulted in a compelling final round of the group stage with a plethora of goals, drama, and surprises.

Group E. One of the biggest shocks was Germany’s premature exit from the tournament. Even though they pulled off a 4-2 win over Costa Rica, they ultimately gave away the second place in the group to Spain, falling behind in goal difference. What makes this more thrilling is Japan’s winning goal over Spain, which came from a pass after the ball had seemingly already gone out of bounds but didn’t get ruled out, granting them a spot at the top of the group.

In Group D, Denmark shocked the football world by settling at the bottom of the group after one draw and two losses, including one to the surprising Australian team on the final matchday of the group stage, helping the Socceroos advance to the playoffs second after France.

Without a doubt, one of the most exhilarating duels occurred between Iran and the USA in Group B. After two draws, the Americans found themselves in third place but ultimately advanced after a 1-0 victory, upsetting the hardworking Iranians, who had displayed great spirit in the tournament, even managing to win Wales by 2-0 in their previous game.

There were also games where despite one team winning, both failed to advance to the playoffs — for instance, Mexico versus Saudi Arabia. Even though the Latin Americans managed to win the match, an opponent’s late goal and multiple failed opportunities for their third goal proved crucial, ruining the dreams of advancing out of Group C for both teams.

Our eyes were also glued to Group H, where South Korea became the first-ever team to be ranked fourth in their group before the last matchday but ultimately qualified for the knockouts thanks to a late goal in a 2-1 win over Cristiano Ronaldo’s Portugal.

Those above and other crucial third-round games, which probably were more than the average heart of a fan can hold, brought nerve-tickling moments, emotional outbursts, and experiences that will surely live rent-free in our memories for years to come.

10 RISKY Transfers That Paid Off!

The Most Unforgettable Moments Of The 2022 NBA Playoffs